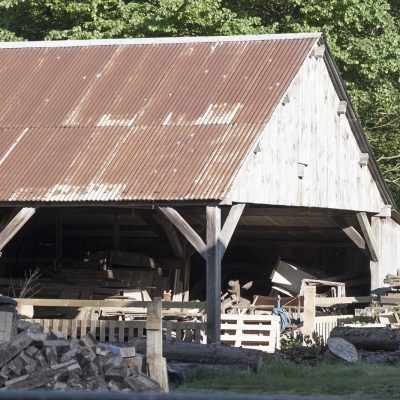 On Saturday 16th April 2016 Avoncroft welcomed its 2,000,000th visitor since it opened to the public in 1967.  Margaret and Raymond Hyder and their grandson Joseph were delighted when they found out they were the lucky recipients of a life membership of the Museum and a celebratory bottle of English bubbly to mark the occasion.

Mr and Mrs Hyder, of Atch Lench, near Evesham, Worcestershire were bringing their grandson, Joseph from Stone in Staffordshire, on a day out to the Museum when they were greeted by Museum Director, Simon Carter and presented with their gifts.

Avoncroft Museum of Historic Buildings opened to the public in June 1967 following a ceremony and medieval banquet in the Museum’s first reconstructed building, the medieval town house, which was rescued from Worcester Road in Bromsgrove.  The famous designer and furniture maker Sir Gordon Russell, officially opened the Museum.

Since then Avoncroft have reconstructed 30 different historic buildings and structures, rescued after they were threatened with demolition or dereliction, on the open-air museum site at Stoke Heath, Bromsgrove. It is an independent museum which is owned by those who pay an annual membership and elect a board of Trustees to run it.  It raises all its own funding to undertake the work by charging an admission price and applying for grants and donations towards the upkeep and for new projects.

Simon Carter, Director of Avoncroft said “We were very pleased to welcome the Hyder family and all the 1,999,999 of our visitors before them.  Reaching 2,000,000 visitors shows what an important asset Avoncroft is to Bromsgrove, as for almost 50 years we’ve been bringing large numbers of visitors into the town and area and showing them the history of the people of the midlands through our rescued buildings.  With an average of over 40,000 visitors each year since 1967, Avoncroft has made a significant contribution to the economic wealth of Bromsgrove as well as providing a great day out for visitors from near and far.

We’re very proud to have a collection of buildings which are not grand architecture, but represent the everyday buildings used by all our forbears, whatever their wealth or backgrounds.  We are very much the opposite of what we think of as ‘glass case’ museums, where everything is behind barriers and in locked cases.  Many of our annual members visit regularly and treat the Museum like a countryside park, where they can bring the children to run around and take in the history as well as just enjoying the outdoors.  We are very much a friendly and un-stuffy museum!

We’ve been planning our long-term future and have some exciting new developments in the pipeline over the next couple of years, which we hope will bring in lots more visitors.  I’m confident that it won’t take another 50 years to attract another 2 million to Avoncroft to see this wonderful collection”.